Cooker Hoods extract  grease, moisture and smells. An essential part of any Kitchen

Built-in cooker hoods (sometimes called integrated cooker hoods) fit inside a kitchen wall cabinet. A good choice if you're short on space and don't want to make a feature of your cooker hood. Suitable for standard-width or narrow cookers and hobs. Tend to be on the small side, usually measuring 52-60cm wide.

Canopy hoods sit flush with the underside of kitchen wall units. Consider a canopy hood if you have limited space. Some canopy hoods have an extendable telescopic section to provide a greater surface area for extraction. You may see these hoods listed as telescopic hoods, rather than canopy hoods, on retailer websites

If your cooker backs on to a wall, you might want a chimney-style hood – particularly for larger cookers, or cookers that are located where wall cupboards would look out of place. These consist of a canopy plus a chimney. Chimney cooker hoods come in either stainless steel, glass, or a combination of the two. Their large size can make them a stylish feature in your kitchen. You'll need to get one with a canopy that spreads all the way across the width of your cooker – so whether you've got four rings on your hob or a wide cooker with eight burners, make sure you choose an appropriate size. 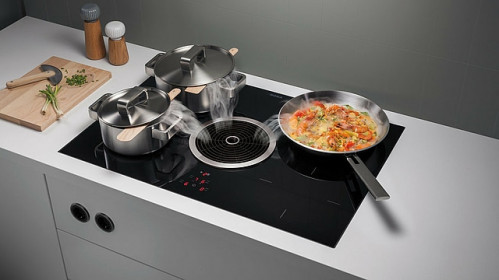